Unitarian Universalism adopted the symbol of the flaming chalice to represent the light of mercy and hope as well as the meaning of inclusiveness. The long history associated with the chalice helps us better understand our past. 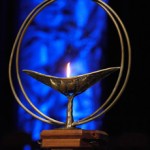 The chalice dates back to the year 1401 when young Jan Hus entered the priesthood in Bohemia, part of The Holy Roman Empire. He was highly successful as a priest even though he largely ignored formal theology, instead speaking to the times in which he lived and to the needs of the many who heard him preach. The Roman Catholic Church soon began to question the preachings of Hus and eventually excommunicated him from the church. Hus went into exile but continued to read, write and preach to his large following.

In addition to straying from the traditional teachings of the Roman Catholic Church, Hus taught that communion bread and wine did not change into the real flesh and blood of Jesus, but were symbolic. Hus believed that communion should be offered to the congregation, not just to laymen or priests. This was not well received by the church authorities, and Hus was arrested and tried by a court of his peers. Hus was forced to dress up in priestly garments as he was handed a communion chalice of wine. As the charges of his conviction were read, his robes were torn from his body and the communion chalice was symbolically grabbed from his hands. It was decided first that Hus’s hair should be shorn and then that he be burned at the stake.

For the many who followed Hus, this tragedy was symbolized by the flame joined with the the chalice, which became the symbol of a great movement in Bohemia and Eastern Europe and was worn proudly on cloaks and battle armor for hundreds of years. In addition to representing the flame of the death of Jan Hus, the chalice stood for communion and respect for all people.

A flaming chalice was later designed by an Austrian refugee, Hans Deutsch, in appreciation for the humanitarian work of the Unitarian Service Committee during World War II. The sign of the flame and the circle was often seen on buildings, trucks, boxes of food, medicines and clothing during that period. The helpless and homeless came to identify the chalice as a promise of help with no reservations based on religion or race.

Today, the Unitarian Universalist Association chalice has two circles, one representing Unitarianism, the other Universalism, thus adding the meaning of inclusiveness and oneness to the symbolism of the chalice. The flame represents the search for meaning and truth as well as the light of mercy and hope to those in need.